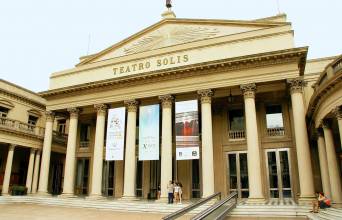 Solís Theatre Solís Theatre (Spanish: Teatro Solís) is Uruguay's most important and renowned theatre. It opened in 1856 and the building was designed by the Italian architect Carlo Zucchi. It is located in Montevideo's Old Town, right next to the Plaza Independencia.

In 1998, the government of Montevideo started a major reconstruction of the theatre, which included two columns designed by Philippe Starck. The reconstruction was completed in 2004 with the re-opening taking place in August of that year. Acoustic studies of the rehabilitation project was entrusted to Jerome Falala of the French studio Avel Acoustique.