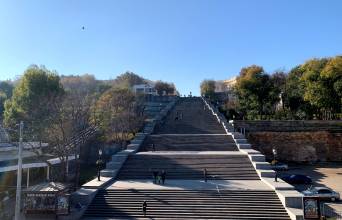 Potemkin Stairs The Potemkin Stairs, or Potemkin Steps (Ukrainian: Потьомкінські сходи, Potj'omkins'ky Skhody, Russian: Потёмкинская лестница, Potyomkinskaya Lestnitsa), is a giant stairway in Odessa, Ukraine. The stairs are considered a formal entrance into the city from the direction of the sea and are the best known symbol of Odessa.

The stairs were originally known as the Boulevard steps, the Giant Staircase, or the Richelieu steps. The top step is 12.5 meters (41 feet) wide, and the lowest step is 21.7 meters (70.8 feet) wide. The staircase extends for 142 meters, but it gives the illusion of greater length.