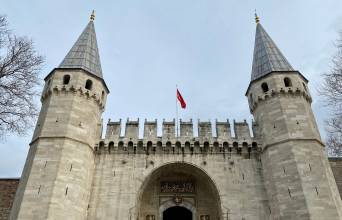 Topkapı Palace The Topkapı Palace (Turkish: Topkapı Sarayı; Ottoman Turkish: طوپقپو سرايى‎, Ṭopḳapu Sarāyı; meaning Cannon Gate Palace), or the Seraglio, is a large museum in the east of the Fatih district of Istanbul in Turkey. In the 15th and 16th centuries it served as the main residence and administrative headquarters of the Ottoman sultans.

Construction, ordered by the Sultan Mehmed the Conqueror, began in 1459, six years after the conquest of Constantinople. Topkapı was originally called the "New Palace" (Yeni Saray or Saray-ı Cedîd-i Âmire) to distinguish it from the Old Palace (Eski Saray or Sarây-ı Atîk-i Âmire) in Beyazıt Square.

It was given the name Topkapı, meaning Cannon Gate, in the 19th century. The complex expanded over the centuries, with major renovations after the 1509 earthquake and the 1665 fire. The palace complex consists of four main courtyards and many smaller buildings.

Female members of the Sultan's family lived in the harem, and leading state officials, including the Grand Vizier, held meetings in the Imperial Council building. After the 17th century, Topkapı gradually lost its importance. The sultans of that period preferred to spend more time in their new palaces along the Bosphorus.

In 1856 Sultan Abdulmejid I decided to move the court to the newly built Dolmabahçe Palace. Topkapı retained some of its functions, including the imperial treasury, library and mint. After the end of the Ottoman Empire in 1923, a government decree dated April 3, 1924 transformed Topkapı into a museum.

Turkey's Ministry of Culture and Tourism now administers the Topkapı Palace Museum. The palace complex has hundreds of rooms and chambers, but only the most important are accessible to the public as of 2020, including the Ottoman Imperial Harem and the treasury, called hazine where the Spoonmaker's Diamond and the Topkapi Dagger are on display.

The museum collection also includes Ottoman clothing, weapons, armor, miniatures, religious relics, and illuminated manuscripts such as the Topkapi manuscript. Officials of the ministry as well as armed guards of the Turkish military guard the complex. The Topkapı Palace forms a part the Historic Areas of Istanbul, a group of sites in Istanbul that UNESCO recognised as a World Heritage Site in 1985.