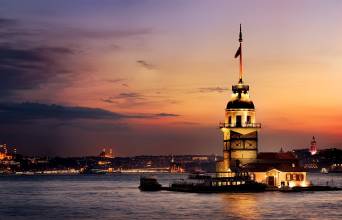 Maiden's Tower Map of Constantinople (1422) by Florentine cartographer Cristoforo Buondelmonti, showing Pera at the north of the Golden Horn, Constantinople at south, and the Maiden's Tower at right, in the middle of the sea, near the coast of Üsküdar on the Asian side of the Bosphorus.