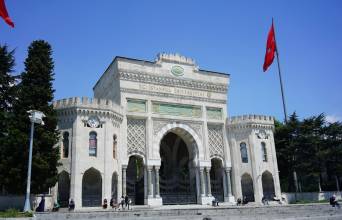 Beyazıt Square Beyazıt Square (Turkish: Beyazıt Meydanı) is a square in the district of Fatih, situated in the European part of Istanbul, Turkey. It is officially named Freedom Square (Hürriyet Meydanı), but is known as Beyazıt Square after the Bayezid II Mosque on one side of it.

The Square is the former site of the Forum of Theodosius built by Constantine the Great. On one side of the square is the main entrance of Istanbul University; the Beyazıt Tower is on the university's campus and can be seen from the square. The current form of the square was designed by Turgut Cansever.

The square has been the site of political protests, including some in 1969 known as Bloody Sunday, and a terrorist attack in 1978 (Beyazıt Massacre). In 1915 twenty Armenian activists were hanged in the square (The 20 Hunchakian gallows).