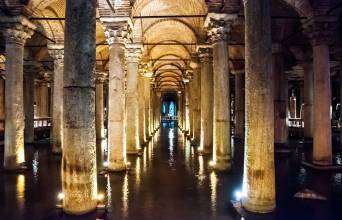 Basilica Cistern The Basilica Cistern, or Cisterna Basilica (Turkish: Yerebatan Sarnıcı – "Subterranean Cistern"), is the largest of several hundred ancient cisterns that lie beneath the city of Istanbul (formerly Constantinople), Turkey. The cistern, located 150 metres (490 ft) southwest of the Hagia Sophia on the historical peninsula of Sarayburnu, was built in the 6th century during the reign of Byzantine Emperor Justinian I.

Today it is kept with little water, for public access inside the space.