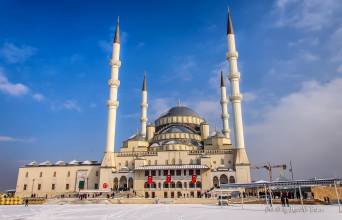 Kocatepe Mosque The Kocatepe Mosque (Turkish: Kocatepe Camii) is the largest mosque in Ankara, Turkey. It was built between 1967 and 1987 in the Kocatepe quarter in Kızılay, and its size and prominent situation have made it a landmark that can be seen from almost anywhere in central Ankara.