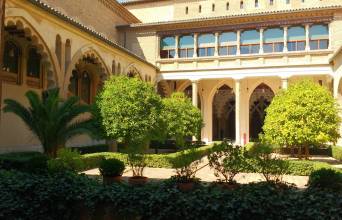 Aljafería The exterior facade of the Aljafería was rebuilt in the 20th century. The Aljafería Palace (Spanish: Palacio de la Aljafería; Arabic: قصر الجعفرية‎, tr. Qaṣr al-Jaʿfariyah) is a fortified medieval palace built during the second half of the 11th century in the Taifa of Zaragoza in Al-Andalus, present day Zaragoza, Aragon, Spain.

It was the residence of the Banu Hud dynasty during the era of Abu Jaffar Al-Muqtadir. The palace reflects the splendour attained by the Taifa of Zaragoza at the height of its grandeur. It currently contains the Cortes (regional parliament) of the autonomous community of Aragon.

The structure holds unique importance in that it is the only conserved testimony of a large building of Spanish Islamic architecture of the era of the Taifas (independent kingdoms). The Aljaferia, along with the Mosque–Cathedral of Córdoba and the Alhambra are three of the best examples of Hispano-Muslim architecture.

In 2001, the original restored structures of the Aljafería were included in the Mudéjar Architecture of Aragon, a World Heritage Site.The solutions adopted in the ornamentation of the Aljafería, such as the use of mixtilinear arcs and springers, the extension of arabesque in large area, and the schematisation and progressive abstraction of the yeserias of a vegetal nature, decisively influenced Almoravid and Almohad art in the Iberian Peninsula.

The transition of the decoration towards more geometric motifs is at the basis of Nasrid art. After the reconquest of Zaragoza in 1118 by Alfonso I of Aragón, it became the residence of the Christian kings of the Kingdom of Aragón. It was used as a royal residence by Peter IV of Aragón (1319-1387) and later, on the main floor, the reform was carried out that converted these rooms into the palace of the Catholic Monarchs in 1492.

In 1593 it underwent another restructuring that would turn it into a military fortress, first according to Renaissance designs (which today can be seen in its surroundings, moat and gardens) and later for quartering military regiments. It underwent continuous restructuring and damage, especially with the Sieges of Zaragoza of the Peninsular War, until, unusually for historical buildings in Spain, it was finally restored in the second half of the 20th century.

The palace was built outside Zaragoza's Roman walls, in the plain of the saría. With urban expansion through the years, it is now inside the city.