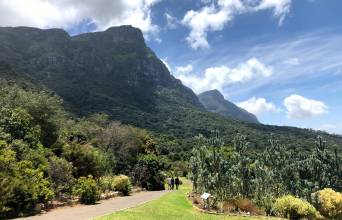 Prior to 1 September 2004, the institute was known as the National Botanical Institute. Kirstenbosch places a strong emphasis on the cultivation of indigenous plants. When Kirstenbosch was founded in 1913 to preserve the flora native to the South Africa’s territory, it was the first botanical garden in the world with this ethos, at a time when invasive species were not considered an ecological and environmental problem.

The garden includes a large conservatory (The Botanical Society Conservatory) exhibiting plants from a number of different regions, including savanna, fynbos, karoo and others. Outdoors, the focus is on plants native to the Cape region, highlighted by the spectacular collections of proteas.