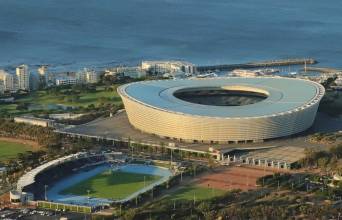 Cape Town Stadium The Cape Town Stadium (Afrikaans: Kaapstad-stadion; Xhosa: Inkundla yezemidlalo yaseKapa) is a football and Rugby union stadium in Cape Town, South Africa, that was built for the 2010 FIFA World Cup. During the planning stage, it was known as the Green Point Stadium, which was the name of the previous stadium on the site, and this name was also used frequently during World Cup media coverage.

It is the home ground of Premier Soccer League clubs Ajax Cape Town (since 2010) and Cape Town City (since 2016). It has also hosted the South Africa Sevens rugby tournament since 2015. The stadium is located in Green Point, between Signal Hill and the Atlantic Ocean, close to the Cape Town city centre and to the Victoria & Alfred Waterfront, a popular tourist and shopping venue.

The stadium had a seating capacity of 64,100 during the 2010 World Cup, later reduced to 55,000. The stadium is connected to the waterfront by a new road connection, Granger Bay Boulevard.