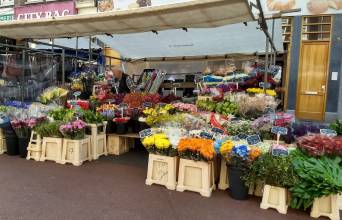 The street and market are named for Albert Cuyp, a painter from the 17th century. The market began as an ad hoc collection of street traders and pushcarts. By the beginning of the 20th century, this had become so chaotic that in 1905, the city government decided to set up a market, at first only held on Saturday evenings.

In 1912, the market became a daytime market open six days a week. Originally the street was accessible while the market was taking place, but more recently the street has been completely closed off to traffic during market hours. The product selection at the market varies from the traditional range of vegetables, fruit and fish to clothing and even cameras.

There are many products sold that are of interest to the city's residents of Surinamese, Antillean, Turkish, and Moroccan origin, giving the market and neighbourhood a strong multicultural feel. The market is the busiest in all of the Netherlands and is reputedly the largest daytime market in Europe.

It is also an important tourist attraction. The famous Dutch Stroopwafels are prepared fresh here. Also popular are the many ethnic restaurants and bars that are found behind the market stalls.