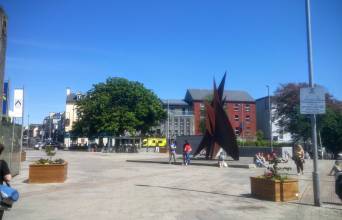 Eyre Square Eyre Square (; Irish: An Fhaiche Mhór, also known as John F. Kennedy Memorial Park) is an inner-city public park in Galway, Ireland. The park is within the city centre, adjoining the nearby shopping area of William Street and Shop Street. Galway railway station is adjacent to Eyre Square.

The park is rectangular, surrounded on three sides by streets that form the major traffic arteries into Galway city centre; the west side of the square was pedestrianised in 2006.