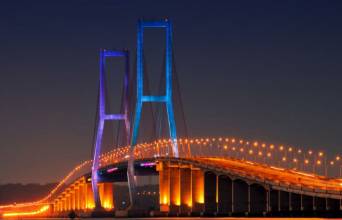 4-km bridge is the longest in Indonesia and the first bridge to cross the Madura Strait.The cable-stayed portion has three spans with lengths 192 m, 434 m, and 192 m. The bridge has two lanes in each direction plus an emergency lane and a dedicated lane for motorcycles in each direction.