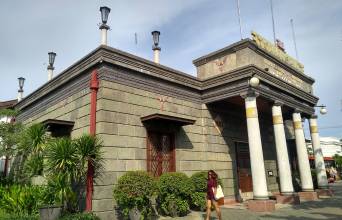 House of Sampoerna The House of Sampoerna is a tobacco museum and headquarters of Sampoerna located in Surabaya. The main building's architectural style influenced by Dutch colonial-style compound was built in 1862, and is now a preserved historical site. Previously used as an orphanage managed by the Dutch‚ it was purchased in 1932, by Liem Seeng Tee‚ the founder of Sampoerna‚ with the intent of it being used as Sampoerna's first major cigarette production facility.

The compound consisted of a large central auditorium‚ two smaller buildings on the east and west sides and numerous large‚ single story‚ open-space structures behind the central auditorium. The side buildings were converted to family residences and the large warehouse-like structures were used to accommodate facilities for tobacco and clove processing‚ blending‚ hand-rolling and packaging‚ printing and finished goods processing.

In commemoration of Sampoerna's 90th anniversary in 2003‚ the central complex has been painstakingly restored and is now open to public. The original central auditorium is now a museum and a shop. The east side has been transformed into a unique structure containing a café and an art gallery.

The building on the west side remains the official family residence.