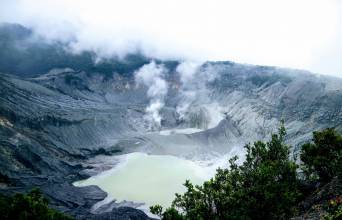 It is a popular tourist attraction where tourists hike or ride to the edge of the crater to view the hot water springs and boiling mud up close, and buy eggs cooked on the hot surface. Together with Mount Burangrang and Bukit Tunggul, it is a remnant of the ancient Mount Sunda after the plinian eruption caused the Caldera to collapse.

In April 2005, the Directorate of Volcanology and Geological Hazard Mitigation raised an alert, forbidding visitors from going up the volcano. "Sensors on the slopes of the two mountains - Anak Krakatoa on the southern tip of Sumatra Island and Tangkuban Perahu in Java - picked up an increase in volcanic activity and a build-up of gases, said government volcanologist Syamsul Rizal." On the mountain's northern flank is Death Valley, which derives its name from a frequent accumulation of poisonous gases.