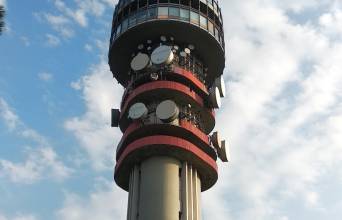 The Tower The Pécs TV Tower is a television tower in Pécs, Hungary, standing on the Misina peak of Mecsek (535 meters), measuring 197 metres, with a publicly accessible observation deck at a height of 75 metres, and a restaurant at 72 metres. The tower was built from 1968 to 1973.

There is a dinosaur exhibition at the restaurant level, with two life-sized dinosaur mock-ups, depicting the once native Komlosaurus.