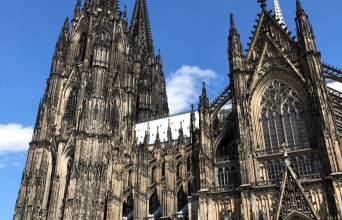 It is the largest Gothic church in Northern Europe and has the second-tallest spires. The towers for its two huge spires give the cathedral the largest façade of any church in the world. The choir has the largest height to width ratio, 3.6:1, of any medieval church.Construction of Cologne Cathedral began in 1248 but was halted in 1473, unfinished.

Work did not restart until the 1840s, and the edifice was completed to its original Medieval plan in 1880.Cologne's medieval builders had planned a grand structure to house the reliquary of the Three Kings and fit its role as a place of worship for the Holy Roman Emperor.

Despite having been left incomplete during the medieval period, Cologne Cathedral eventually became unified as "a masterpiece of exceptional intrinsic value" and "a powerful testimony to the strength and persistence of Christian belief in medieval and modern Europe".