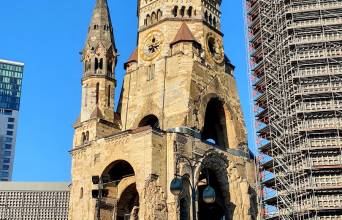 It is located in Berlin on the Kurfürstendamm in the centre of the Breitscheidplatz. The original church on the site was built in the 1890s. It was badly damaged in a bombing raid in 1943. The present building, which consists of a church with an attached foyer and a separate belfry with an attached chapel, was built between 1959 and 1963.

The damaged spire of the old church has been retained and its ground floor has been made into a memorial hall. The Memorial Church today is a famous landmark of western Berlin, and is nicknamed by Berliners "der hohle Zahn", meaning "the hollow tooth".