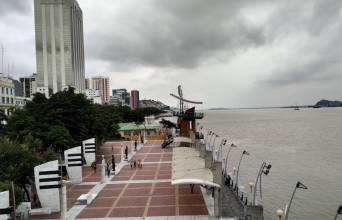 Malecón 2000 Malecón 2000 is the name given to boardwalk overlooking the Guayas River in the Ecuadorian port city of Guayaquil. An urban renewal project focusing on the old Simón Bolívar boardwalk, it stands along the west shore of the river for an approximate length of 2.

5 km. (1.5 mi.) Several of the greatest historical monuments in the history of Guayaquil can be seen along its length, as well as museums, gardens, fountains, shopping malls, restaurants, bars, food courts, the first IMAX theater in South America, as well as boarding docks where several embarkations offer both daytime and nighttime tours up and down the Guayas River.

It is one of the largest works realized in Guayaquil and it is considered a model of urban regeneration by global standards, having been declared a healthy public space by the Pan-American Organization of Health (POH) and the World Health Organization (WHO).