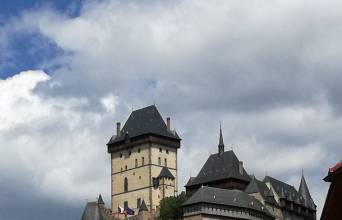 Karlštejn Karlštejn Castle (Czech: hrad Karlštejn; German: Burg Karlstein) is a large Gothic castle founded in 1348 by Charles IV, Holy Roman Emperor-elect and King of Bohemia. The castle served as a place for safekeeping the Imperial Regalia as well as the Bohemian crown jewels, holy relics, and other royal treasures.

Located about 30 kilometres (19 mi) southwest of Prague above the village of the same name, it is one of the most famous and most frequently visited castles in the Czech Republic. A miniature replica of the castle was built by a Czech immigrant in Batchelor, Northern Territory.