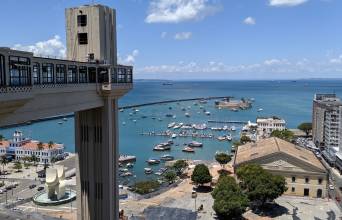 Elevador Lacerda The Lacerda Elevator (Elevador Lacerda) is a public urban elevator located in Salvador, Brazil, connecting the lower city (Cidade Baixa) to the upper city (Cidade Alta). The 72 metres (236 ft) elevator was built between 1869 and 1873; it was named after Antônio de Lacerda, director of the Commercial Association of Bahia.

It was a hydraulic elevator at first; later operating by electricity since 1906. The elevator towers were renovated in 1930, in an Art Deco styling. The Lacerda Elevator has two towers, on that pierces the stone slope of the Ladeira da Montanha, and other, more visible, that goes to the level of the Cidade Baixa.

The elevator has four lifts, carrying 27 passengers each on a 30-second ride costing 0.15 reais. In 2019 it transported above 33,000 passengers per day.The elevator was listed as historical heritage of Brazil by IPHAN, on 7 December 2006.