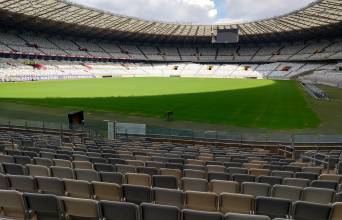 Mineirão Mineirão (Portuguese pronunciation: [minejˈɾɐ̃w]), officially Estádio Governador Magalhães Pinto (Governor Magalhães Pinto Stadium) is the largest football stadium in the state of Minas Gerais. It was established in 1965, and it is located in Belo Horizonte.

It served as a venue in the 2013 FIFA Confederations Cup and the 2014 FIFA World Cup. It also hosted some matches of the football tournament of the 2016 Summer Olympics. The stadium has a seating capacity of 61,846 spectators. The property of the state of Minas Gerais, it is used by Cruzeiro as its home, with Atlético Mineiro playing some matches in it as well.