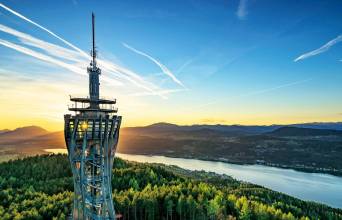 Pyramidenkogel Pyramidenkogel is an 851-metre-high (2,792 ft) mountain in Carinthia, Austria. It is located to the south of the Wörthersee and near the town of Maria Wörth, in an area that is a boundary between speakers of German and Slovenian. In nearby Slovenia the mountain is known as Jedvovca.

The mountain has been a tourist attraction since at least the late 19th century. The view from its top is mentioned in Karl Baedeker's 1879 The Eastern Alps.Another mountain named Pyramidenkogel can be found in Austrian Totes Gebirge mountain range. Located south-east of the Almsee, its height is 1961 m.