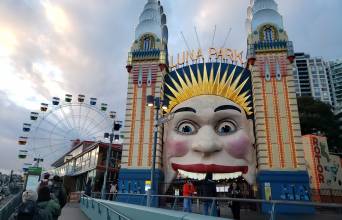 The park was constructed during 1935 approximately 600 metres (2,000 ft) from the northern approaches of the Sydney Harbour Bridge, and ran for seventy-month seasons until 1972, when it was opened year-round. Luna Park was closed in mid-1979, immediately following the Ghost Train fire, which killed six children and one adult.

Most of the park was demolished, and a new amusement park was constructed; this originally operated under the name of Harbourside Amusement Park before resuming the Luna Park name. The park was closed again in 1988 as an independent engineering inspection determined that several rides needed urgent repair.

The owners failed to repair and reopen the park before a New South Wales government deadline, and ownership was passed to a new body. Reopening in 1995, Luna Park closed again after thirteen months because of the Big Dipper rollercoaster: noise pollution complaints from residents on the clifftop above the park caused the ride's operating hours to be heavily restricted, and the resultant drop in attendance made the park unprofitable.

After another redevelopment, Luna Park reopened in 2004 and has continued operating since. Luna Park is one of two amusement parks in the world that are protected by government legislation; several of the buildings on the site are also listed on the (now defunct) Register of the National Estate and the New South Wales State Heritage Register.

The park has been utilised as a filming location for several movies and television shows.