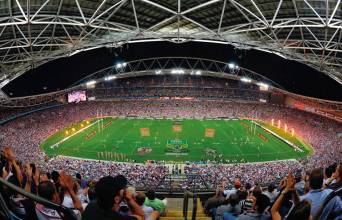 The stadium was originally built to hold 110,000 spectators, making it the largest Olympic Stadium ever built and the second largest stadium in Australia after the Melbourne Cricket Ground which held more than 120,000 before its re-design in the early 2000s.

In 2003, reconfiguration work was completed to shorten the north and south wings, and install movable seating. These changes reduced the capacity to 83,500 for a rectangular field and 82,500 for an oval field. Awnings were also added over the north and south stands, allowing most of the seating to be under cover.

The stadium was engineered along sustainable lines, e.g., utilising less steel in the roof structure than the Olympic stadiums of Athens and Beijing.