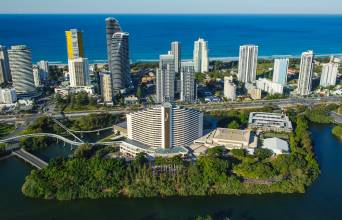 The Star Gold Coast The Star Gold Coast (formerly Jupiters Hotel and Casino) is a casino and hotel located in the suburb of Broadbeach on the Gold Coast in Queensland, Australia. The casino, which was Queensland's first, is situated next to the Nerang River and is operated by Star Entertainment Group.

It opened in February 1986 as Conrad Jupiters. In 2017 it was rebranded as The Star, Gold Coast.One per cent of the casino's gross gaming revenue is deposited in the Gambling Community Benefit Fund. This fund was established in 1987, supports non-profit community-based groups and is administered by the Government of Queensland.