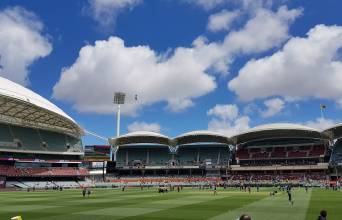 Adelaide Oval Adelaide Oval is a sports ground in Adelaide, South Australia, located in the parklands between the city centre and North Adelaide. The venue is predominantly used for cricket and Australian rules football, but has also played host to rugby league, rugby union, soccer, tennis among other sports as well as regularly being used to hold concerts.

Austadiums.com described Adelaide Oval as being "one of the most picturesque Test cricket grounds in Australia, if not the world". After the completion of the ground‘s most recent redevelopment in 2014, sports journalist Gerard Whateley described the venue as being "the most perfect piece of modern architecture because it's a thoroughly contemporary stadium with all the character that it's had in the past".

Adelaide Oval has been headquarters to the South Australian Cricket Association (SACA) since 1871 and South Australian National Football League (SANFL) since 2014. The stadium is managed by the Adelaide Oval Stadium Management Authority (AOSMA). Its record crowd for cricket was 55,317 for the Second Ashes Test on 2 December 2017 and its record crowd for an Australian rules football match was 62,543 at the 1965 SANFL Grand Final between Port Adelaide and Sturt.