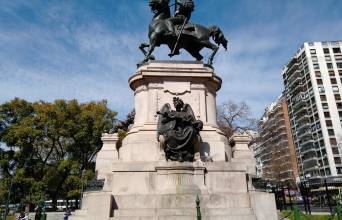 Plaza Italia, Buenos Aires Mosaic celebrating the start of the first electric tram of the city. Monument to Giuseppe Garibaldi, in Plaza Italia. Cornerstone ceremony for the monument in 1898. Plaza Italia is a small park in the city of Buenos Aires in the barrio of Palermo on the confluence of Santa Fe Avenue and Avenida Sarmiento.

Next to the plaza are the main entrances to the Zoo and the Botanical Gardens, and the la Rural Expo Center. The area is very busy with traffic, as it is a public transportation hub for the city. In the center of the park there is an equestrian statue to Giuseppe Garibaldi, which opened on 19 June 1904 in a ceremony attended by Presidents Julio Argentino Roca and Bartolomé Mitre.

Under the park there is a metro station of the same name in the "D" line of the system. On the corner of the Plaza and the Exposition Center there is a Roman column, original from the Roman Forum, donated by the city of Rome. More than 2,000 years old, it is one of the oldest monument in the city.